The Covid pandemic has severely dented airline flight activity and the associated aftermarket for maintaining aircraft, but the situation in the business aviation sector is far more positive, according to Rolls-Royce. The engine manufacturer reports business aircraft flight hours as being well above pre-pandemic levels, with air charter activity at what Andy Robinson, senior v-p for business aviation services, described as “an all-time high.”

According to Robinson, at the height of the pandemic business aircraft usage slipped to around 80 percent of 2019 levels before recovering emphatically. “Operators became more proactive in terms of maintenance tasks and our workload increased dramatically to well above anything we’ve ever seen,” he explained. “This put a strain on the system, with our team having to make difficult road trips, living out of hotel rooms and then facing quarantine when they got home.”

There are now around 7,600 turbofans in service on business jets with more than 3,000 customers worldwide, and around 2,600 aircraft are covered by Rolls-Royce’s Corporate Care and Corporate Care Enhanced support packages. These contracts shift all the risk and cost exposure to the manufacturer, including all spare parts, replacement engines, and all aspects of maintenance.

Under the Enhanced program, which was launched in January 2019 and now has 737 customers under contract, Rolls-Royce has extended coverage to the nacelle to include components such as thrust reversers and inlets. “This followed feedback from customers who said that they wanted us to include costs such as troubleshooting hours and oil used during engine changes,” Robinson told AIN. “It also includes corrosion and erosion and I don’t think anyone else covers that.”

What operators seem to crave most from the Corporate Care plans is complete certainty over all aspects of maintenance costs. They also get, said Rolls-Royce, a great deal of peace of mind that engines will almost always be operable for flights, with the company currently achieving an averted trip rate of 99.1 percent.

The recent service entry of the Pearl 15 turbofans on Bombardier’s latest Global 5500 and 6500 aircraft has further boosted Rolls-Royce’s installed base. The Pearl 700 is now in flight tests on rival Gulfstream’s G700 model en route to service entry at the end of 2022, in addition to the just-announced Gulfstream G800 set for service entry in 2023. This is set to be followed by the Pearl 10X on the new Dassault Falcon 10X in 2025.

The Pearls come with an engine vibration health and monitoring unit that increases the number of performance parameters tracked from 2,000 on earlier powerplant to over 10,000. “The big advantage is that from one box we can access both of an aircraft’s engines, as well as engine accessories, such as a fuel monitoring unit, and can see when things are starting to fail and fix them early to avoid disruption to trips,” Robinson explained.

One recent innovation that proved its worth during the pandemic was the virtual reality training Rolls-Royce introduced in June 2020. This allowed the manufacturer to train its own customers’ mechanics remotely, using Oculus goggles, handheld controls, and computers.

The company won an AIN TopFlight Award for the use of this VR technology to support engines such as the BR725s on Gulfstream’s G650. Visitors to the NBAA-BACE show will be able to try it out for themselves, with instructors in Las Vegas to run training courses (Booth 1833).

Rolls-Royce also is showcasing its new SAFinity initiative, which is designed to make it easier for operators to meet their commitments to boost the use of sustainable aviation fuel. The service is based on an app that allows customers to verify the fuel burn for each engine time and then buy the amount of SAF required for the planned trip.

While the fuel doesn’t necessarily get pumped into that specific aircraft, Rolls-Royce and partners including Shell will ensure that it does get used, issuing a certificate independently verifying the transaction. “We’re actually buying the SAF, and not just offsets to cover trips,” Robinson explained.

All of the company’s engines can now run on a 50 percent SAF blend. The Pearl 700 has done a full power run on 100 percent SAF and so will be ready when it is available in this concentration.

Meanwhile, Rolls-Royce is stepping up its involvement in the electrification of aviation. The company is developing electric propulsion systems for the VA-X4 eVTOL aircraft being developed by UK startup Vertical Aerospace and also is partnered with Italy’s Tecnam to develop the P-Volt commuter aircraft. This work has prompted Robinson and his team to start thinking about what the maintenance needs will be for electric motors, batteries, and other hardware when it enters service around 2024.

These 2 Cannabis Stocks Could Double (Or More), Says Analyst

Fri Oct 15 , 2021
The past few years have seen a tremendous boost in the US cannabis industry, as 36 states have legalized the substance for medical or recreational use, or both, and several others have decriminalized it. At the Federal level, cannabis remains an illegal narcotic – but Federal law also prohibits prosecution […] 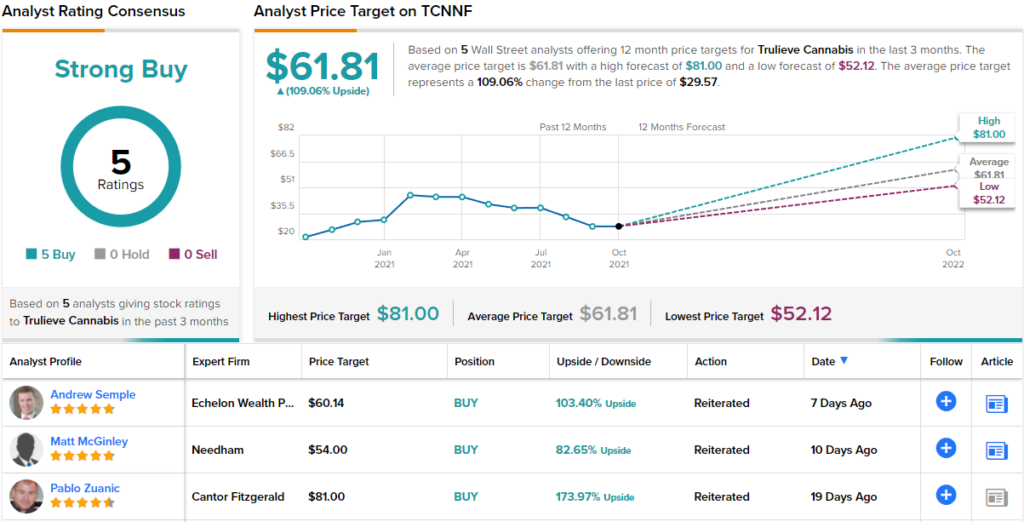