One of the major turning points in James Curran’s life — who has been well-known as JTM or James the Mormon — came when he was 21 years old.

After being expelled from BYU-Idaho for the second time, he moved to St. George and found a job at a local restaurant. He remembers going to a party at friend’s house after work on Christmas Eve. He said he was drunk and high on marijuana when he made the decision to drive home.

Before he could get there, the young man was pulled over by a policeman who smelled alcohol and asked if he had been drinking. Curran lied and said no, but he had been around others who were drinking. The policeman stepped away with his license and registration. Curran was certain he was going to jail.

But it didn’t happen. When the policeman returned, he handed Curran his license and said, “I have no idea why I’m doing this, but merry Christmas. Drive home right now.”

Curran obeyed. As he contemplated the negative direction his life could have gone that night, his only explanation was that God had intervened.

The pivotal experience led Curran to rectify his life and unlocked the gateway to a brighter future.

Today the 35-year-old is the founder and CEO of Whistlepitch, a technology company that provides clients with trackable content and real-time analytics to help eliminate redundancy and focus efforts where they are most effective. He has previously launched other tech companies and has business dealings in real estate, Airbnb and other ventures.

A few years ago Curran was the successful rap artist known as James the Mormon, but he no longer goes by that moniker. He still dabbles in music as a hobby, but is more passionate about being an entrepreneur and innovating technology these days.

“We are getting better,” he said. “We are growing, so it’s an exciting time.”

Curran, a Brigham Young University graduate, spoke with the Deseret News recently about his life and career path, his business experience and how he hopes to make a difference in the Black-owned technology space in timing with Black History Month.

Here are six questions with the entrepreneur and technology innovator.

Note: This interview has been edited for length and clarity.

Deseret News: You were born in Utah but grew up in several different countries. Where have you lived around the world?

James Curran: My mother, who passed away last September, was a U.S. diplomat. My father served a (Latter-day Saint) mission in Chile and my mother was in the Dominican Republic and Puerto Rico mission. Then she joined the U.S. Foreign Service. Because she spoke Spanish they sent her to Mexico. She became pregnant with me in Mexico. They didn’t want me to be born in Mexico so they came to Utah. I was born, we were here for two weeks, then went back to Mexico.

From there, we went to Ontario, Canada; then to Taiwan, to Beijing, to Moscow, to Uzbekistan. In between those stints, the way it works with the Foreign Service is that you always come back to the United States for about a year. So in between all of those I was in the Washington, D.C., area, in either Virginia or Maryland, for about a year, and then we would go back overseas for about three years.

DN: For a few years now you have attempted to rebrand yourself and move away from the moniker “James the Mormon.” How is that going for you?

JC: Terribly. I have learned that especially within niche communities, if you gain notoriety, that’s who you are within that community. I am going to die as “James the Mormon,” regardless of what I do in my life, even if I left the church, which I have no intention of doing. But I would still be James the Mormon because that’s how they were introduced to me. So no matter what I call myself, and trust me, I’ve tried to rebrand several times, I’m always referred to as James the Mormon.

I’ve also realized that making music is hard to outshine, regardless of what it means to me. What I’m doing with Whistlepitch and these other entrepreneurial ventures are so much more exciting and successful in my mind that what James the Mormon was.

But no matter what I do — “Yeah, I’m doing Whistlepitch, we’re growing, we just hit this metric of success” — people are like, “Oh, cool. What about music?” It’s funny. So I guess I don’t think I’m going to really outshine that. I think that will just follow me the rest of my life. It’s just something I’m going to have to deal with.

JC: I make music as a hobby. If you look back on past interviews, even when I had the No. 1 album in America, I said this is a hobby. It’s a hobby that I liked doing. I can’t control how many people like to see what I make or create, there’s waves of success with that. But yeah, until the end of my life, I’ll probably create music as a hobby and if people enjoy it, then they can listen to it.

DN: February is Black History Month. Is there somebody in Black history that has influenced or inspired you?

So that moment when he became president was very critical to my life and I’m sure to the lives of other Black people in America, who likely had similar “aha” moments.

If I can provide a little bit of the “aha” moment that Barack Obama provided for me to other people, then I am very proud of that. We hope to do that.

DN: When did you realize you wanted to be an entrepreneur?

JC: I’ve been an entrepreneur since I was like 12 years old. I used to sell candy at school to make money. I would go get those fun-sized bags for $5 and then sell the 30 pieces in there for .50 a piece, make a $10 profit.

I would sell CDs at school. In college, I would organize events. Before my mission, I would tour events from Rexburg, Idaho, all the way to St. George — all the college towns — and throw these massive parties. It would cost a couple thousand dollars to put the party together. Then we would sell tickets and charge $5 a person. My take home was probably $5,000 a party.

I went on a mission (Washington Everett Mission, Russian speaking) and really learned who I was. I spent every dime I had to serve a mission. When I came home, I was completely broke. I worked for Vivint to make some money. I was their No. 1 sales rep for an entire year in 2012. From that point on I’ve been an entrepreneur.

I just was lucky enough to have a roommate who won the BYU business plan competition. He introduced me to the tech world. We were the co-founders of Stickr.co. I sold my equity to pursue music for a couple of years and see what that had to offer, but came right back to tech.

I think my greatest strength is seeing an opportunity, then acting upon it.

DN: What is it about your work that gives you the most satisfaction?

JC: The coolest part about Whistlepitch, especially as a business owner, comes when we are demoing the software. It’s cool to see how quickly they can see the value in their own processes. We plug things in and we make their lives easier so they can actually live life. To be able to work together to solve their specific problems and add value to their specific processes is really cool.

I also want to inspire people of color to think beyond what they told they’re capable of, like beyond being athletes or musicians. They could be tech innovators or business leaders in every possible industry. That’s really important to me because I saw other people doing it, then I said, I can do it. I want them to see, not just me, but other Black leaders or people doing things so they can say, I can do that too.

I really want to provide the “aha” moment that Barack Obama did for me and I genuinely believe that representation is so huge in changing the minds of what people think they’re capable of.

Europe at war: Six charts to know in monetary markets 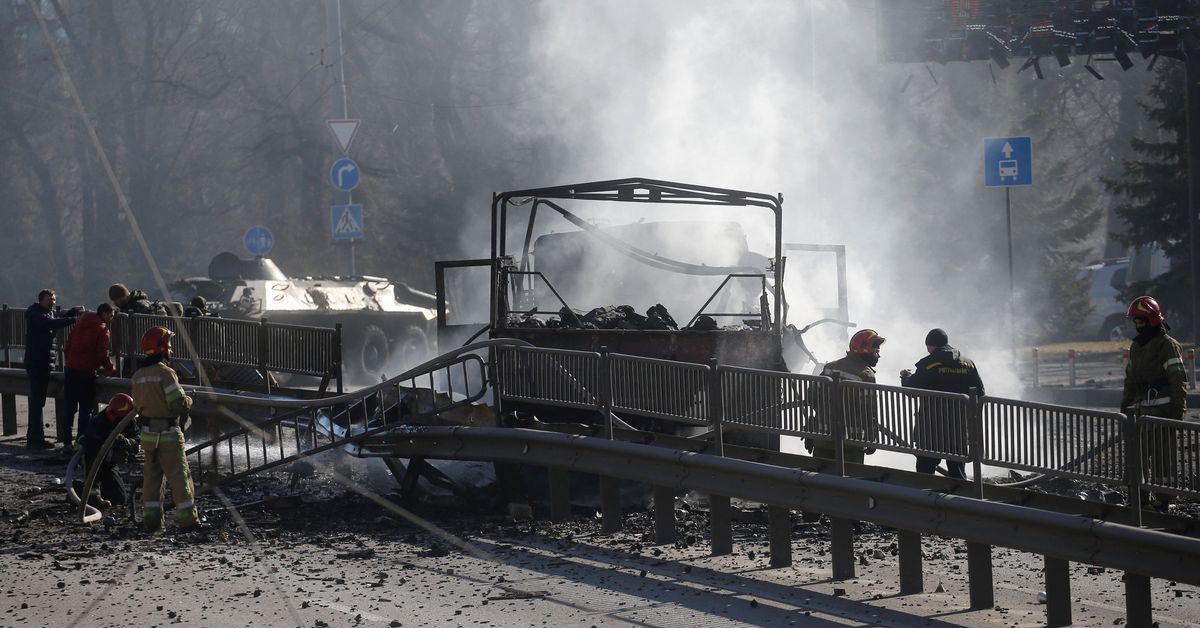